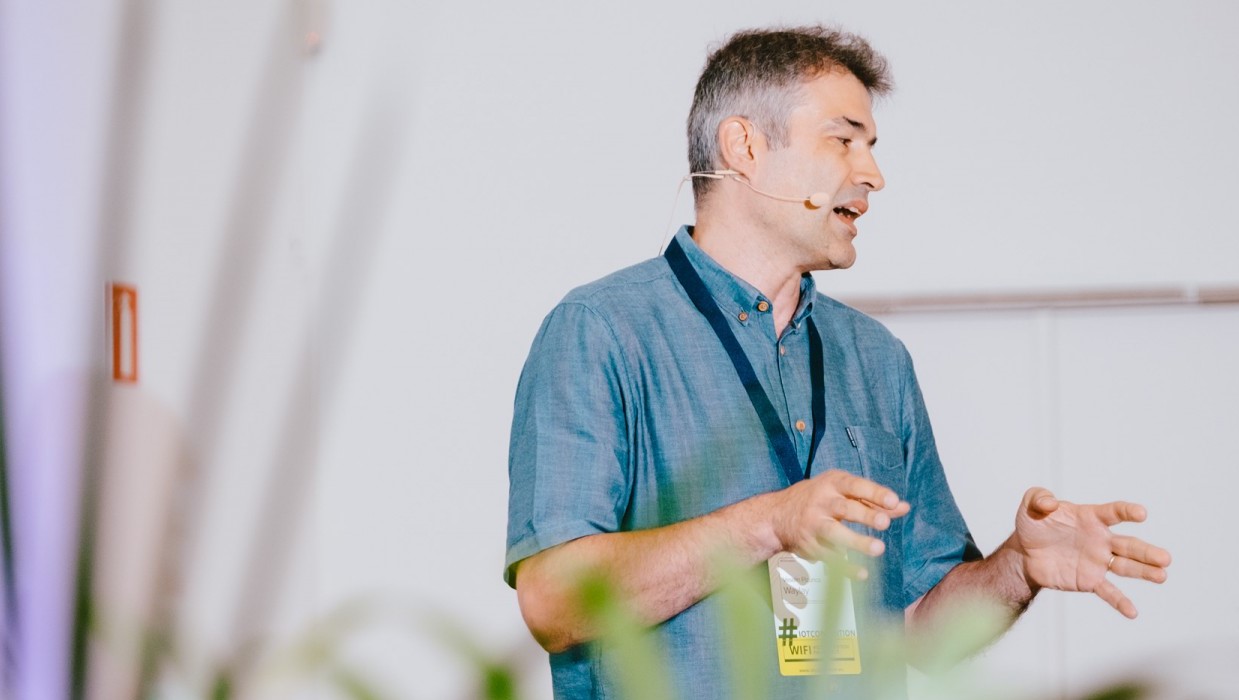 IoT first appeared on Gartner’s emerging technologies hype cycle in 2011 – how has the market behaved as compared to expectations and is Waylay going with the market, is it ahead, is it behind?

The market’s enthusiasm around the rapid reach of billions of predicted connected devices has thankfully been cooling down recently. But we have seen IoT startups rise and fall on the idea that a very small piece of a very big pie would still mean a lot of pie. We were cautious to not underestimate the pie’s baking time – IoT would not have that fast of an adoption rate. So instead of chasing big numbers, we focused on a bottom-up approach, building references, betting on the technology, starting from there and seeing how far we can go in small increments. Looking back I realise that that was one of our advantages over some other startups that are in a difficult spot.

Where did you envision Waylay would be four years down the road and how far away is it from your initial vision?

We started the company to solve specific challenges that we believed enterprise automation was facing (or was going to face) in the context of the massive rise and merging of IoT applications with the API economy. I approached the challenge from the engineering side, I wanted to bring in something new to the table – and indeed we now have a patented technology at the core of our product. Piet approached it from the business side, he saw the opportunity to help enterprises transform by connecting the previously unconnected: physical products, enterprise software and web services.

What was very apparent from the start for both of us was that although we believed there was great potential here, we knew it was not going to be the type of endeavour that brings in overnight success. We went in it for the long run, knowing it was going to be difficult to pull through, especially during the first years. We put everything we had into showing what our technology can do, rather than in building an entertaining story around it. Automation is not an inherently sexy subject, it would have been difficult to bet on the story, and to be honest, we’re not very good entertainers, we’re engineers.

What are the major highs and lows of developing and selling a cutting-edge B2B product? What would you say is the number one factor for a company with such a product to survive on the market?

I believe developing and selling B2B products in general is especially difficult for a startup. You need to brace for long selling cycles, corporate inertia, giant competitors… What’s most important – you need to prove your worth in order to establish trust. And startups are just promises, ideas, visions – we always face the risk of getting trapped inside a chicken and egg story – we need a customer to prove our case, but we need solid proof to get the customer.

Business automation in particular is an especially difficult B2B product to sell as it lies at the very heart of a company’s operations. It’s a little easier when you come with a highly specialised offer that serves one single purpose or solves one very specific problem (an ERP system for example, a CRM, a payment system etc). We don’t – in most cases our customers will have to implement their whole business processes on top of our automation framework. Add that to the fact that we are treading on fresh grounds – large scale automations between physical products, enterprise software and web services is not a treaded path – and you can see that this is no breeze.

As for the highs – it is incredibly rewarding when you do pull it off! And you are in select company – only the toughest and most robust technologies succeed.

If I am to think of one factor for surviving- what I feel helped Waylay was our determination to focus on the technology and to make it easy for proof of concept customers to test and validate their business cases. That helped them to further sell the idea and our product internally to upper management for further full scale development.

How do founders measure success at Waylay, has this measure changed over the past four years?

It’s very easy to fall for the allure of vanity metrics – and there are plenty of those both on the business side and on the technology side. We have tried to stick to just one measure of success that can be formulated into this simple question: “Is someone willing to pay for what we create?”. It’s ultimately what it all boils down to, especially as a startup. This was how we planned to measure success when we first started and this is how we do it still, four years down the road.

What are the values that you share as founders and how are these reflected in Waylay’s values as a company?

This may not appeal to some people but to me the whole concept of “company values” has a fishy feel to it. Here’s how I see it. As founders, Piet and myself will always have a different relationship with the company than any of the other team members. I won’t speak for Piet but for me Waylay is both my job and my hobby. Asking the same level of involvement from the rest of your teammates isn’t realistic. I wouldn’t want people working at Waylay to live and breathe Waylay and think of Waylay as their hobby- I would hope that they have their own hobbies to be passionate about outside of the Waylay office. It’s my own interpretation of the life-work balance if you will.

The way I see it, this “company culture / company values” card is often being played a little bit too hard by founders and startups, especially in the tech area. They often abuse it to enforce an artificially inflated sense of belonging that would extend into people’s private lives and into people’s private time. What is very important for me and Piet is that people feel appreciated and comfortable enough working at Waylay to give their very best. It’s true that we all share a huge passion for what we do at Waylay but what I don’t want is for people to feel forced to be tribal.

Who do you admire and why do they inspire you?

That’s quite a big list but the first two names that come to mind are Nikola Tesla and Richard Feynman. Feynman simply for the amazing scientist that he was. Tesla because of three things that I deeply relate to – he was originally from Serbia like myself, he was an underdog and he was a fierce believer in the idea that science and technology should serve humanity.

And let’s close with a fun question. What in your opinion is the biggest problem that humanity can solve with the help of technology and do we see this technology on any radar today?

To me, just by being an engineer you have a significant impact on society. This is not a shared feeling among engineers, most of them have no interest (or no clue) of the true impact that their work has on society. Richard Feynman himself, when asked how he felt about his work being used to create the atomic bomb, said that it was of no concern to him; he chose not to care. Myself I feel we have as scientists and engineers an inherent responsibility to care about how our work can transform societies, for the good or for the bad.

If you ask about what’s on the radar – there are excellent scientific papers published today hinting at various ways AI will transform people and society, my personal favourites are the theories of humans and machines converging through bioengineering or human enhancement technologies. I believe cyborgs are going to be a very common sight much sooner than people expect it. People now already think of enhancements of physical capabilities through prosthetics or physical gadgets but what fascinates me even more is neural enhancements of cognitive capabilities- which I believe is something that is going to happen very fast and take the world by storm.

My least favourite are the singularity theories – I find these ridiculous. I truly believe there will never be a question of man versus AI, what we will have is the challenge of dealing with the increased convergence of man with AI.